Redskins running back Adrian Peterson will have a chance to exact revenge on his old friends in Minnesota, according to NFL.com’s Tom Pelissero (on Twitter). Peterson was dealing with some ankle issues, but he will be active for the team’s Thursday night matchup against the Vikings. 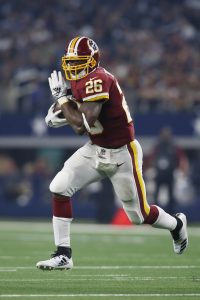 Peterson was listed as questionable, but earlier today, he vowed to “bite down” and play through it. That’s not great news for the Vikings, especially since Peterson will be coming in with extra motivation. He might not be the AD of old, but he’s still an effective rusher coming off of two quality games. He ran for 118 yards against the struggling Dolphins and followed up that effort with a solid 4+ yards per carry against the Niners.

On the other side of the ball, cornerback Josh Norman will play, despite dealing with some thigh and hand pain. That’s notable for obvious reasons, but also because Norman’s name has been bandied about in trade speculation. The Redskins continue to reject calls about Trent Williams, but they’re reportedly open to moving Norman and his sizable contract.

Norman joined the Redskins on a $15MM/year deal back in 2016, but, so far, he has not matched the production of his Carolina years. Norman graded as Pro Football Focus’ No. 50 corner last season. This year, his 50.0 overall score has him at No. 98 among CBs.