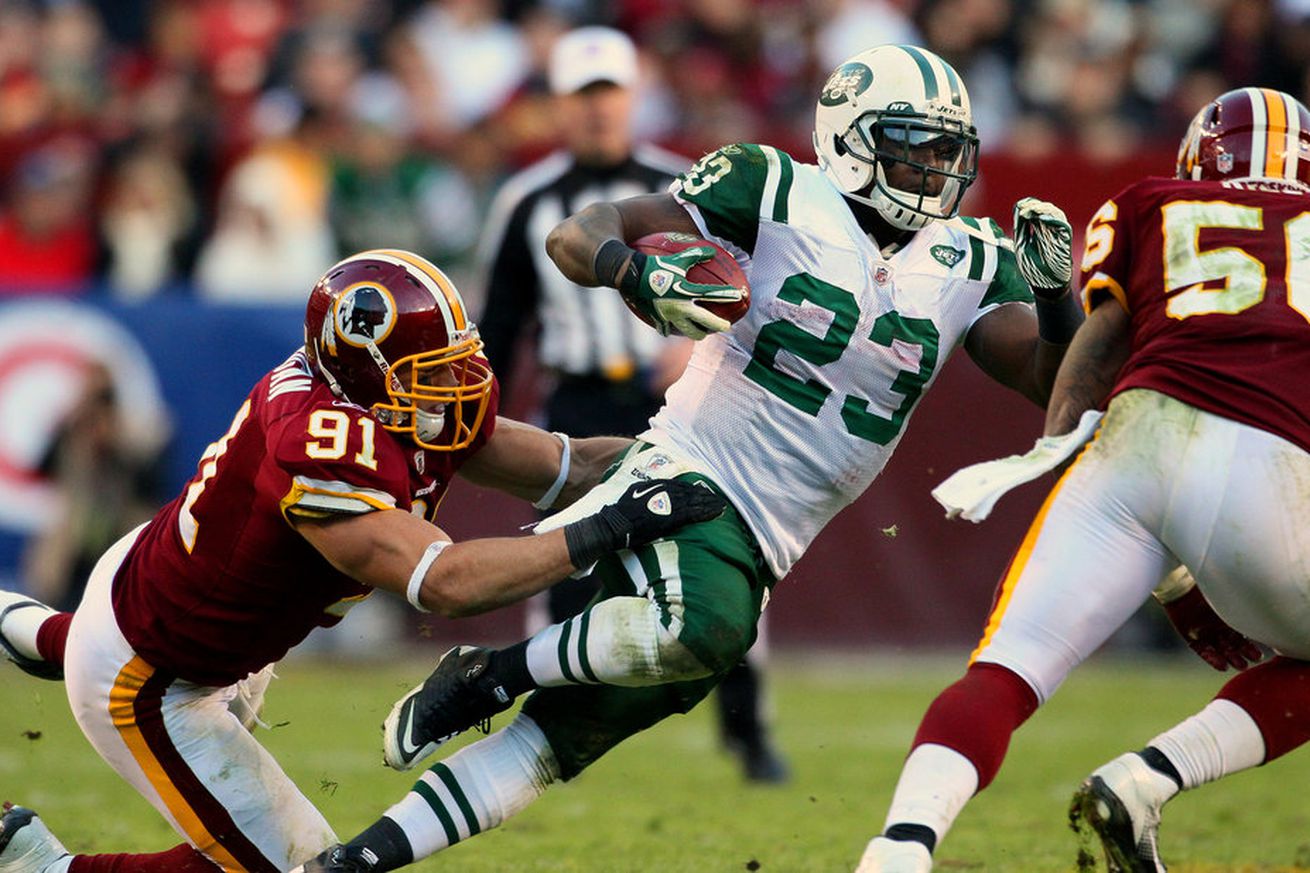 It’s Week 11 of the regular season, and the 1-8 Washington Redskins will be facing off against the 2-7 New York Jets this Sunday in a battle for the ages.

The Jets are a bit of a mess right now, but their strengths and weaknesses line up pretty well with those of the Redskins. The Jets defense has proven poor at stopping the pass, but very effective at stopping the run and dialing up creative (and aggressive) blitzes on QBs. The Jets offense has proven poor at running the ball, but has thrived in the short passing game the Skins have struggled to cover.

I asked MacGregor Wells of Gang Green Nation five questions to better understand the state of the Jets and what to look for in this game.

1. If you were head coach of the Redskins, how would you gameplan for this matchup and what would you do to exploit weaknesses on the Jets?

Beating the Jets has not been difficult in 2019. On offense you need to target the Jets’ outside cornerbacks, who are abysmal, and the Jets inside linebackers, who are literally 3rd and 4th stringers. I’m not sure how much rookie Dwayne Haskins is ready to carry the team yet, but against the Jets, running the ball is difficult, so a game plan that tries to take the pressure off the rookie quarterback by pounding the rock all game isn’t likely to produce great results. Target the inside linebackers with running backs and tight ends in the passing game, and keep the passing game to safer passes to avoid turnovers. Chris Thompson and Jeremy Sprinkle need to play big roles in the game plan this week, and of course the Jets don’t really have anyone to match up against Terry McLaurin. Unfortunately for the Redskins, this plan requires the rookie quarterback to play a big role and make smart decisions with the football, which can be a challenge for rookies.

On defense the Redskins need to put pressure on Sam Darnold and force turnovers. The Jets have the worst offensive line in the NFL, so that should not be a difficult task. The Jets are helpless against blitzes and stunts; do a lot of those things and watch the sacks and turnovers pile up. Shutting down the running game has proven to be remarkably easy for Jets opponents. The Jets offensive line opens no holes for the running backs, who get hit behind the line of scrimmage on almost every play, so I wouldn’t worry too much about that. Just bring the heat against Darnold, don’t allow Robby Anderson to slip behind your defense for big plays, and the Jets offense should fold.

2. At one time, Sam Darnold was considered by many to be the best college QB prospect of his draft class. What happened to him, and do you think he is the franchise QB going forward?

Darnold may still turn out to be the best quarterback of the 2018 draft, although it’s looking like Lamar Jackson will be tough to beat on that score.

Sam Darnold remains a work in progress. The Jets have done him no favors, with a horrendous offensive line which allows relentless heavy pressure week after week. He also has a very poor group of offensive weapons, with only Le’Veon Bell being a plus player on the offensive side of the ball. The Jets can’t run the ball behind an awful offensive line. That forces the Jets to try to win with the passing game, behind an awful offensive line. That has Darnold running for his life and getting pounded most weeks. When he is given time Darnold looks like an NFL quarterback for the most part. When he is pressured, like many young quarterbacks, Darnold is not yet ready to beat the pressure and consistently make winning plays. His mechanics fall apart, his decision making is often disastrous under pressure, he doesn’t do a good job making the hot read when blitzed, and he takes too long to get through his progressions. Experience and good coaching might fix those problems, but not if the Jets don’t support him with a decent offensive line and better weapons.

3. So… about Adam Gase. I realize he isn’t super popular among Jets fans right now, but how much of the season record is due to him and how much is the result of poor roster talent/tough schedule/Darnold being sick/other excuses? What do you think the season record would be with Doug Pederson as head coach?

I’m not sure it’s about the team’s record with Adam Gase. The Jets opened the season with a brutal first 6 games that everyone knew going into the season would be problematic. Nobody expected a Jets team with a poor roster, despite a few high end talents, would go out and dominate. On top of that, the Jets have had more injuries this year than usual, and Sam Darnold was out for three weeks with mono. The Jets have been missing a ton of starters most of the year, and the depth on this team is terrible. Bad roster, bad luck with injuries, tough schedule, they all have factored into the Jets terrible record.

That, however, does not exclude the possibility that Adam Gase has done a terrible job as head coach. Gase was brought in as a “quarterback whisperer”, and his young quarterback is not progressing. In fact, if anything Darnold looks worse under Gase. Gase was brought in as an “offensive guru”, and he has put together the worst offense in the NFL. Yes, injuries and lack of talent have played a role, but under Gase, literally every single player on offense with a prior track record in the NFL is having their worst season in the NFL. A below average offensive line has morphed into one of the worst offensive lines in NFL history. Free runners, pass rushers completely unblocked and unaccounted for, are a staple of opposing defenses against the Jets offensive line, which seems unable to cope with stunts and blitzes, bewildered as to who should be blocking whom. A Hall of Fame talent at running back in Le’Veon Bell has been reduced to one of the least productive starting running backs in the NFL. A good deep threat in Robby Anderson has been all but invisible with the exception of one long 90+ yard TD catch. The young quarterback is regressing, looking worse than he did as a rookie. There is literally no aspect of this Jets offense that hasn’t gotten worse under Gase, and the blame for that must fall squarely on a head coach who has lead some of the worst offenses in the NFL every single year of his career as an NFL head coach.

I don’t really know how to answer the question about what the record would be with Doug Pederson. With the Jets’ poor roster construction and many injuries it would be a challenge for any coach to have this team winning. But I am confident most decent head coaches would have this team much more competitive, particularly on offense, than the garbage that the Jets have trotted out there most weeks this season under Gase.

4. A surprising (to me) number of Redskins fans still carry a torch for Gregg Williams as a head coach candidate given his history with the Skins. What have you seen out of Gregg Williams so far as defensive coordinator and do you think he would make a good head coach?

Gregg Williams has done a pretty good job in his first season as defensive coordinator of the Jets. The run defense has been outstanding. The pass defense has struggled a bit, but not as much as I expected coming into the season. The Jets have no pass rushers at all, and the Jets have no outside cornerbacks on the roster who should be starting in the NFL. In addition the Jets have had their top 5 inside linebackers all go down with injuries, forcing then to start an outside linebacker out of position inside, and a practice squad guy at the other inside linebacker position. Given this hot mess of a roster, Williams has done a pretty good job keeping the defense competitive most weeks.

Would Williams make a good head coach? I don’t know, I would be wary. He did a good job as an interim head coach in Cleveland last year, and he’s had a long career as an above average defensive coordinator. But Williams has made a habit of wearing out his welcome around the league, never staying in one place for very long. He is hyper intense, a trait that produces good results over the short run but can result in players tuning you out over the long run. I suspect a Williams tenure at head coach might start out well, but end poorly and prematurely. Just a hunch.

5. Due to a surprising bank error in your favor, you have been named new owner of the Jets! What would you do to turn the franchise around?

I think the first thing that needs to be done is structural. Right now the head coach and the general manager both report directly to the owner. That structure needs to end. My first move would be to fire Adam Gase. Then I would give Joe Douglas control of the team. Douglas would hire the next head coach, and Douglas would have the authority to fire the head coach. I would also make it clear to Douglas it is time to tear it all down. He would be given assurances that we are working on a long term plan here that will entail short term pain. Priority should be given to getting younger, building up draft capital, and trading away any player with value who does not fit into the team’s long term plans.

I would hire a salary cap guy who understands how to effectively structure contracts and rosters under the cap, something that is handled surprisingly poorly by many NFL franchises.

I would completely overhaul the Jets’ analytics department, which is currently substandard. The Jets are located right next door to several top universities with outstanding capabilities in mathematics, statistics, computer science and data analytics. It is imperative that the Jets make use of this competitive advantage. Work closely with Rutgers, Princeton, Stevens Tech, NJIT. Endow sports analytics scholarships in these schools and create a pipeline of great analytics geeks who end up working for the Jets and bringing the team into the 21st century.

In the end the success of any NFL team depends on successful drafting, sound cap management, top coaching, and constant innovation. The drafting will be left to Douglas and his scouting department unless and until he proves to be incompetent. The coaching hires will also be left to Douglas, so that the coach and the GM are on the same page. The cap management will be supplied by my cap guy, and the innovation will be supplied by my analytics nerds.

Thanks again to MacGregor Wells for taking time out of his day to answer our questions about the Jets.