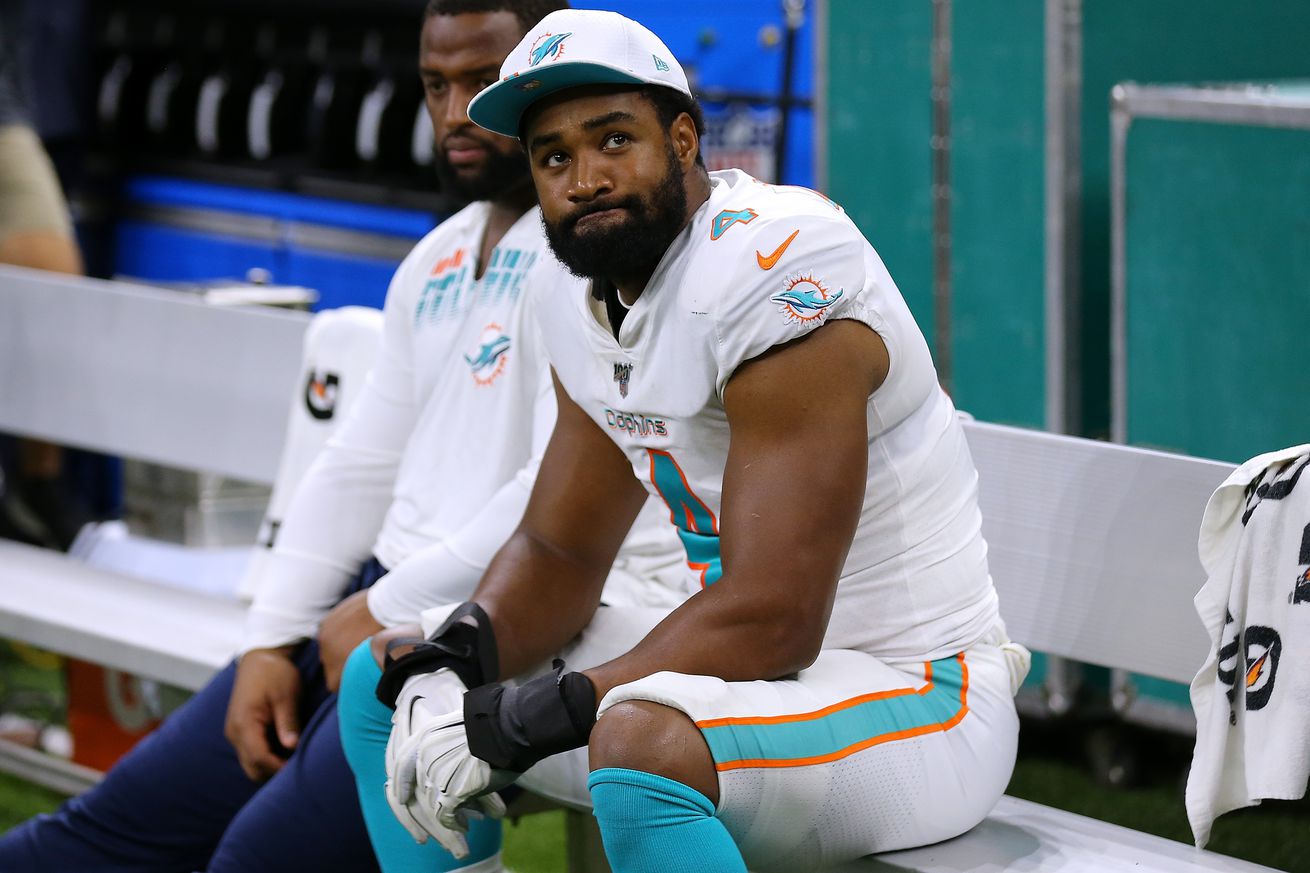 I saw a tweet sometime around Thanksgiving saying that Nate Orchard had been signed by the Redskins.

The name sounded familiar, but I couldn’t immediately connect it to a player I knew anything about, and mentally filed it under “roster churn associated with Kerrigan being in the concussion protocol”. Then it hit me. I had seen Nate Orchard on the 2018 version of Hard Knocks, and had become emotionally invested in his fight to make the Cleveland Browns team.

He’d bounced in and out of the lineup during his time with the Browns, showing desirable speed off the edge but never making a consistent impact. He recorded five sacks and 65 tackles in 34 games with the Browns from 2015-2017, but found himself in a battle for a job with fellow Hard Knocks star Carl Nassib.

Orchard struggled during this preseason, which the series showed while also counterbalancing it with an inside look at his family life. It wasn’t difficult to feel for a father of three trying to keep his football career in Cleveland alive, especially after he was one of those who lived through some of the leanest years in pro football history.

”I must be allergic to sacks,” Orchard memorably said out of frustration after he whiffed on multiple would-be sacks during Cleveland’s Week 2 loss to Buffalo.

Orchard’s late push to make the team came in Week 4 of the preseason when the defensive end dropped into coverage, intercepted Lions quarterback Matt Cassel and returned it 64 yards for a touchdown. It seemed as though he’d finally broken through his struggles, and on the heels of the Browns releasing Mychal Kendricks, might have done enough to grab a final spot.

In the end, he was cut by the Browns ahead of the 2018 season, before being signed and later released by the Bills, and eventually, by Kansas City. In all, he appeared in 4 games last year.

He got an offseason contract with the Seahawks this year, but was released right after the draft. He then signed with the Dolphins, and went through training camp with them before again being released in end-of-camp cuts.

Through the first 12 weeks of the season, Nate Orchard was a free agent, working out on his own and trying to stay ready if he got a call from an NFL team in need. With Ryan Kerrigan on the sidelines while in the concussion protocol, Orchard got his chance.

Nate Orchard versus Kyle Allen and the Panthers

If you watched the game Sunday against the Panthers, you will have noticed Nate Orchard – often hot on the heels of the Panthers quarterback, who spent many plays running away from the Redskins pass rush.

Nate Orchard finished the game with 3 tackles (tied for 2nd most on the team) and one assist. He also scored a sack and was credited with a fumble recovery.

The raw numbers don’t do justice to Orchard’s impact on the game, however. Consider the final Panthers drive of the game, late in the fourth quarter with the Redskins leading by 8 points. Carolina had just scored a touchdown and recovered an onside kick, giving them tons of momentum and a reason to believe they could send the game into overtime.

On a 2nd and 10 play, Odom and Orchard — the two newest members of the Redskins gameday roster — combined on a tackle to bring up 3rd down.

Despite the effort, the Panthers managed to put themselves in a goal-to-go situation two plays later.

1st & goal at the Washington 1 yard line, Cole Holcomb made a tackle for a 1 yard loss on Christian McCaffrey.

The Panthers, knowing that McCaffrey is perhaps the most dangerous running back in the NFL at the moment, gave him the ball again on 2nd & goal from the 2 yard line. This time it was Nate Orchard who made the tackle for loss, keeping the Panthers out of the end zone.

Watching this interview is very worthwhile. In it, Nate Orchard describes the 2nd & goal play where he tackled Christian McCaffrey for a 1-yard loss. Nate says that he’d never practiced goal line with the Redskins; that someone told him to line up at 3 tech, and after that he “just played football”. You also get a sense of how happy he is to be with Washington as he fights to maintain his emotions when talking about having this current opportunity.

It doesn’t surprise me at all that Nate has kept fighting to stay in the league. He’s already overcome so much adversity. Watch this interview after his performance Sunday. Congrats @nateorchard44 https://t.co/V0g67Q7sO4 pic.twitter.com/O4KsuU8vHS

I can’t help but be impressed by Nate Orchard talking about the Redskins like he’s been here forever: “We hadn’t won in Carolina since ‘98”.

After a great pass defense on 3rd down by Quinton Dunbar, the Panthers lined up for their last shot on 4th down.

Anyone who saw the game will forever remember the sight of Kyle Allen running more than 20 yards backwards, being chased by — again — Odom and Orchard. Odom got the sack and a forced fumble; Orchard was credited with the recovery. The play effectively sealed the upset win for the Redskins.

Why Allen didn’t take the flat to the right, I have no idea. But the #Redskins get away with a terrible process at the end of the game to come out with the victory pic.twitter.com/dVx5mS7ccE

Allen failing to spot the obvious and then running frantically off of the screen is a fair comp for the people who were arguing he was better than Cam Newton two months ago. https://t.co/JKRRr73SqX

So, with Kerrigan sidelined and unable to start or play in a game for the first time in his career, Nate Orchard is signed off the street as a free agent, and, when Montez Sweat is injured and Ryan Anderson is ejected from the game, Orchard steps up to become an integral part of a badly needed win on the road.

This is Mark Tyler’s one-sentence take on his play:

Orchard, who has now been tabbed with the nickname of Angry Orchard, was especially impressive with his speed and bend off the edge.

So, who exactly is Nate Orchard?

I saw more than just one or two comments on the gameday thread from people who, not only didn’t know Orchard’s name, but were unaware he was on the team. It was an easy transaction to miss.

Orchard played his college ball at Utah, and was selected in the second round of the 2015 draft by the Cleveland Browns. Being of Tongan decent, Wikipedia reports that his name at birth was Napa’a Lilo Fakahafua and that he legally changed his name from Napa’a Lilo Fakahafua to Nathaniel Fakahafua Orchard in honor of his adopted family.

Coming out of the combine, the projections on Orchard seemed to be mixed. He was promising NFL prospect who had had one really good season in college, but left doubts in the minds of some scouts.

Here’s his draft profile from NFL.com:

Here’s the link to his full combine results.

This overview of his combine results is from NFLCombineResults.com:

Orchard has been something of a journeyman in his relatively short career, spending three seasons with the Browns, but playing in only 3 games in 2016 before being placed on injured reserve, though he played 15 games as a rookie (2015) and 16 games in 2017.

He played 4 games last season — three for the Bills and one for the Chiefs — and spent his 2019 offseason with the Seahawks and Dolphins, but didn’t make a regular season roster.

In his first game with the Redskins, Orchard was an impact player.

What does this mean for the former 2nd rounder who has struggled so much in his NFL career?

Is this a single-game outlier for a player of limited talent, or is Nate Orchard perhaps a “late bloomer” whose hard work, persistence and dedication have finally paid dividends for an organization that took a chance on him?