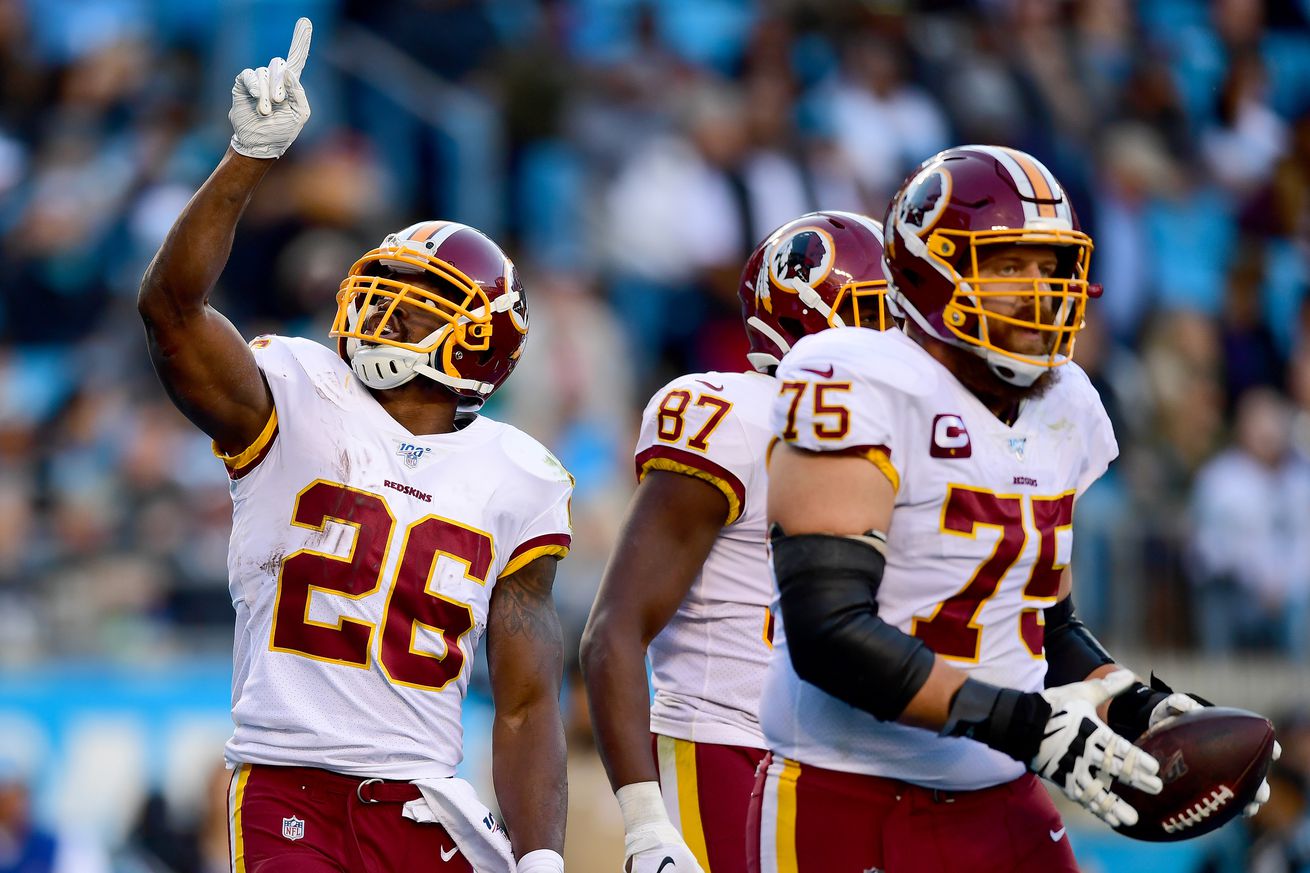 Two wins in a row, you excited yet? There are a couple of things worth mentioning following the win against the Panthers, here is what we learned.

Following a 29-21 victory against the Carolina Panthers, the Redskins enter week 14 on a two-game winning streak. The story over the last two weeks continues to be the development of the younger players such as Dwayne Haskins Jr., Cole Holcomb, DaRon Payne, Fabian Moreau, Steven Sims Jr., Kelvin Harmon, Derrius Guice, Terry McLaurin, and a few others will be integral parts of the team’s future moving forward. Their usage during a game has begun to increase, and in the last two games, each of these players had a hand in the victories in some way. It is a testament to the makeup of the players themselves. Outside of Guice and Haskins, the majority of these younger players have played a part in the 1-9 record leading into the Detroit game. Nevertheless, with their season virtually being ended before November hit, they are still showing 100 percent effort late in the year. It has only been two games, though, against losing teams, so it is important to be level-headed moving forward – but here is what we learned from the week 13 win against the Panthers.

Enjoy the wins as they come; there is nothing wrong with that.

The Redskins staff and their players work hard weekly to produce on the field and come away with a victory. Do not discredit the wins in any manner. It is also completely understandable to not care in a lost season, how many wins the Redskins comes away with down the stretch. If you are one who wants the Redskins to lose strictly because it may help Daniel Snyder fire Bruce Allen, truth be told, the Redskins winning may help with that more than you think. Regardless, the point is there is nothing wrong with the Redskins winning, enjoy the success of the younger players, or not. Both are entirely understandable positions.

Derrius Guice took a while to get here, but he has finally arrived.

Most times, injuries are not anyone’s fault; they happen. That was the case for Guice, who was drafted last year to take over the running back position. His career-best came spectacularly – running through defenders, showing vision that is arguably on the same tier as Adrian Peterson’s, and most importantly, one of the better stiff-arms you will see this season. Guice represents a lot to the fan base; he does not hide his emotions, he interacts with the fan base as much as he can, comes across as a genuinely happy person, but is a bully on the football field. Guice’s play is infectious, and it is a sight to see, he has finally arrived. Hopefully, he continues to stay healthy, the combination of Guice and Peterson can be lethal and will be good for Washington.

Terry McLaurin is leading the Redskins pass-catchers by 349 yards. Chris Thompson is in second place, and he missed five games. If I was the general manager for Washington, I’m sorry but to hell with Chase Young, get some d*mn playmakers at receiver this off-season. This is a combined result of poor quarterback play, no threat at tight-end, poor pass-protection, and not much production from the wide receiver position itself. The Redskins have many needs heading into the off-season; however, they can help the young quarterback and his offense out greatly if they surround him with sufficient talent at receiver and tight end. Sorry Jeremy Sprinkle, but you are not cutting it right now.

The numbers are not pretty, but quarterback Dwayne Haskins continues to develop further each week.

Statistically, Haskins’ numbers are dreadful, and his play at times backs up the numbers, too. However, there are aspects of his game that he continues to develop, and that makes his progression intriguing. Last week, Haskins’ finished what was a terrible performance, greatly, with two scoring drives with the last one being the game-winner. This week, Haskins completes the Panthers game with zero turnovers and a solid feel for the offense. His decision-making was good, and you can tell he is growing more and more comfortable within the game with his fluidity mid-play. Again, Haskins is not perfect; one of the things to focus on moving forward will include avoiding bad sacks. The Redskins are 2-2 with Haskins as the starter, and with four games left, I believe he will prove that the Redskins made the right decision drafting him.