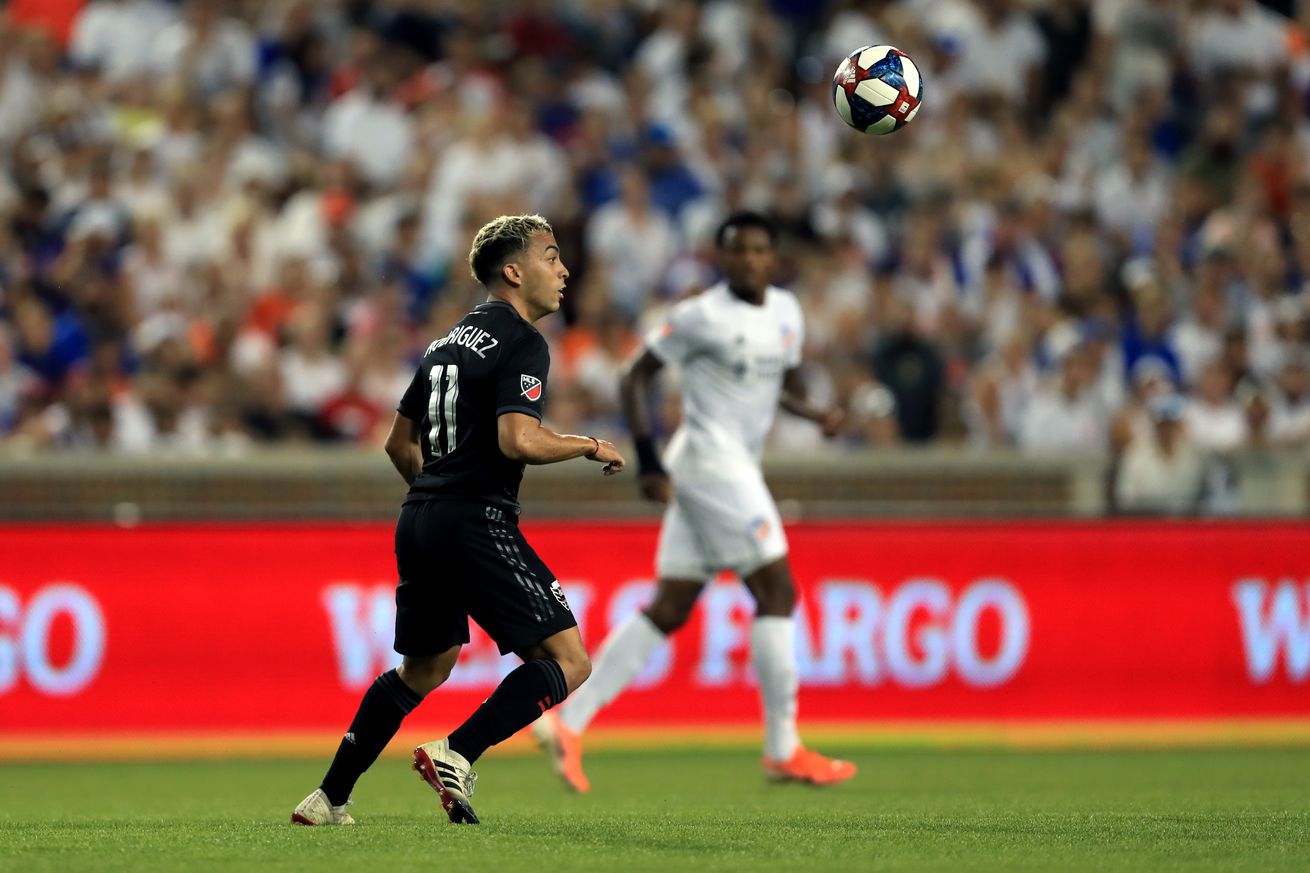 Looking back at the versatile Estudiantes loanee’s year with DCU

Lucas Rodriguez arrived just before 2018 became 2019, and it looked for all the world like a big move for D.C. United. At 21 years old, he already had three seasons of regular minutes in the Argentine top flight under his belt, including games in the Copa Libertadores, and had represented his country at the 2017 Under-20 World Cup. The chatter from Argentina had him regarded as a higher-level prospect than Luciano Acosta was when United first brought him in on loan in 2016.

That pedigree came at a cost, with a loan fee somewhere north of half a million bucks, and a permanent transfer fee clause believed to be in the $2.5-3 million range. The early returns were pretty good, too, as Rodriguez had an assist in a season-opening win over Atlanta, then added a goal in United’s third game of the year.

Let’s take a second to appreciate that goal, which was one of the best scored in all of MLS this season:

That’s a ridiculous goal to score any time, but especially as your first goal in a new league. We had to wait just under a month for a second from Rodriguez, but it was worth the wait:

Unfortunately, the old “it takes a while to adjust to MLS” adage eventually caught up to Rodriguez, who went three months without a goal or assist after this standout turn against the Rapids. While he wasn’t really playing poorly by any stretch, Rodriguez wasn’t quite able to push United out of the doldrums on his own. He was doing enough to stay in the lineup, but at the time there were some not-unreasonable murmurs in the fanbase about whether there needed to be more competition for his starting job.

In the end, “Titi” rebounded, scoring 3 of United’s final 12 goals on the year. He quietly finished the regular season tied for second on the team in goals scored (6), and added United’s only playoff goal. Rodriguez completed 85.6% of his passes, making him United’s third-most accurate passer (and one of the players ahead of him, Emmanuel Boateng, only played 84 minutes). He was United’s most reliable threat on the dribble, and was by far the best source of attacking free kicks on the roster. Rodriguez was fouled 2.6 times per game, which is two times as often as anyone else on the team and good enough for the 7th highest rate in all of MLS. Similarly, his 2.3 successful dribbles per game ranked 10th overall.

Moreover, United’s attack ended up leaning heavily to the left side in part because everyone on the team knew you could give the ball to Rodriguez and trust that he’d a) probably not turn it over and b) was more likely to make something happen in the build-up than the other options on the field at a given time. United’s attack was not good enough in 2019, but it wasn’t because Rodriguez failed to carry enough of the load.

Rodriguez arrived with a reputation of being able to press without the ball very well, and there’s data pointing to his success in that category this season. His 2 tackles per game are only behind Russell Canouse, and it remains puzzling why United wouldn’t commit to high-pressing more often with him and Paul Arriola both in the lineup.

Is there room for improvement? Absolutely. Rodriguez only produced 0.8 key passes per game, a sign that for all his unquestionable technical ability, he still needs to see a larger number of options when on the ball, and to be less deferential. That last bit might be less of an issue on a team that won’t have Wayne Rooney or Luciano Acosta around, but that doesn’t guarantee a solution.

There’s also an open question concerning whether United can move him into the middle now that those two are gone. Given the chance to do so this season, Ben Olsen opted to keep Rodriguez wide, moving Arriola into the middle instead. With Yamil Asad back on the team for 2020, there is now far stronger competition on the wing than there is up the middle. It stands to reason that Rodriguez — who played centrally at least some of the time with Estudiantes — could get a shot there, particularly if the Black-and-Red don’t have a big-money Designated Player lined up for this winter. After all, we’re talking about someone good enough to get called in for Argentina’s last under-23 national team camp.

It appears that United has already made their decision, as he joined the Black-and-Red for their post-season friendly win over Bermuda. When we’re talking about players on loan, you don’t see them suit up for an offseason game like this unless the player is going to stick around. For what it’s worth, Argentine outlets are saying the move might be a permanent transfer rather than a renewal of the loan for another year, but either way, all the signs are pointing to Rodriguez being back for 2020.

However, we’re not here to talk about United’s choice. We want to know your preference: should United bring Rodriguez back, or would you prefer they look elsewhere to spruce up the attack?