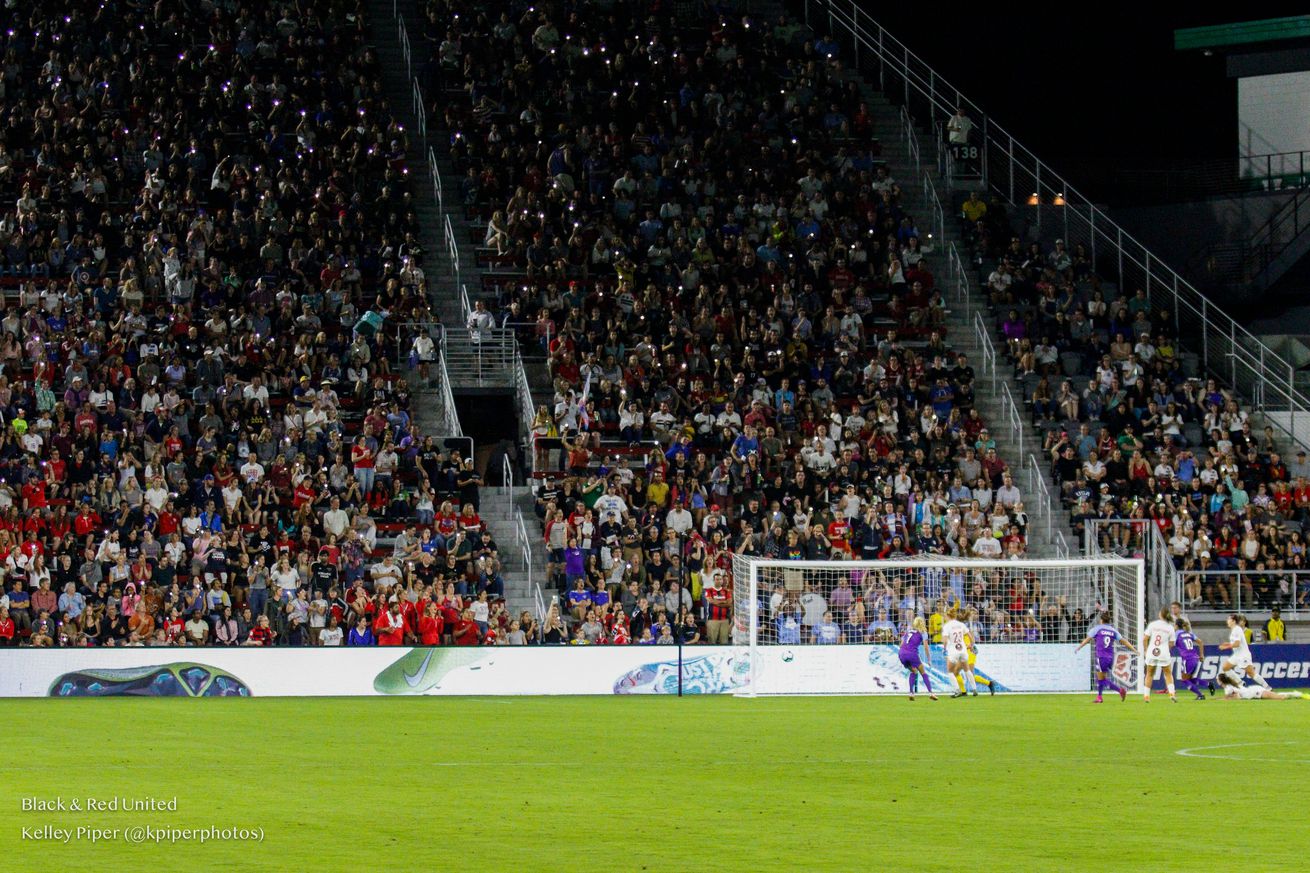 Audi Field, Segra Field, and the Maryland SoccerPlex will all host the Spirit next year

The Washington Spirit have announced an agreement with D.C. United to split their 2020 NWSL schedule jointly among Audi Field, the Maryland SoccerPlex, and Segra Field, the home of the Black-and-Red’s USL Championship affiliate Loudoun United. The Spirit will play four games at each stadium, with dates and opponents to be announced when the NWSL schedule comes out in the coming months.

As part of the deal, a new locker room will be built at Audi Field specifically for the Spirit, increasing the stadium’s total to four (opening the door for possible double-headers down the road). Office space will also be provided at the one-year-old venue, which seats 20,000.

“From the time I assumed control of the Spirit in January, we have had the objective of being the best women’s football club in the world. I could not be happier for our players and fans in what our partnership with D.C. United does to achieve this objective. From day one, D.C. United have been a great partner and I am so grateful for the relationship we have with the entire D.C. United organization,” said Spirit owner Steve Baldwin.

“We look forward to enhancing our partnership with the Spirit as we work to provide soccer fans in the DMV with increasing opportunities to experience the world’s game,” added United CEO and co-chairman Jason Levien via team release.

During an earlier phase of negotiations, sources had told Black and Red United that one prospective version of the deal included a guarantee that if the Spirit hit certain average attendance figures, they would be able to make a permanent move to Audi Field. However, the details changed along the way, and sources now tell B&RU that there is no such provision in the contract.

That said, Baldwin has been open about wanting more games there, and reiterated that at today’s press conference. “Our objective for our players is to have them play on the biggest stage possible, every single match. Audi Field is that destination.”

The deal conforms with reports from the Washington Post’s Steve Goff, who reported that the sides had finalized a deal earlier this week. That report also notes that the Spirit will continue training at the SoccerPlex before moving to United’s still-under-construction training facility no later than 2021. Current plans would also include a 2021 season featuring seven games at Audi Field and five at Segra Field, though with NWSL expected to expand in that timeframe, Washington may have more than 12 home games to account for.

Baldwin did note that after the 2020 season, the Spirit would look to work with officials for the Maryland SoccerPlex towards the goal of playing at least one preseason game at their longtime home in seasons going forward.

Notably, the Spirit are also planning on footing the bill for bus service from a yet-to-be-determined site in Germantown on gamedays at both Audi Field and Segra Field. Baldwin also said that the club will create a program to reimburse fans that do not reside in Loudoun County for tolls paid getting to and from Leesburg. “Those extra costs are not going to be the reason that fans don’t come see us,” said Baldwin.

Baldwin also took time to underline the importance of the Spirit’s eventual move to United’s training facility. “While we’re ecstatic about being able to play in Loudoun County and at Audi [Field], when I actually look at it, I think the most important aspect of the partnership is our team residing at the new training facility. It’s going to be a world-class training facility… Our players will have the same thing that both Loudoun United and D.C. United will have.”

Spirit head coach Richie Burke agreed, noting that “The big piece for us is getting to a real professional high-level training base, which I think our players deserve,” Burke mentioned that the SoccerPlex is a facility that to some degree is open to the general public, in contrast with the plans for the new training center. “We have done a great job at the Maryland SoccerPlex to try to replicate what top professionals have in Europe, but I think this next piece here is just a slam dunk.”

The Spirit averaged 18,645 in their two games at Audi Field this season, after drawing 7,976 in their Buzzard Point debut last year at the end of a brutal season on the field. While it is tempting to attribute the jump entirely to the “World Cup bump” often discussed in NWSL circles following the USWNT’s triumph in France, the Spirit’s improvements off the field has resulted in an organization that can more reliably sell tickets across the board. The Spirit had three sellouts at the Maryland SoccerPlex in 2019, making up for a slow start to the season — likely attributable to a historically bad 2018 — to reach an average attendance of 3,597 in the 10 games they played in Boyds, MD.

Playing at Segra Field will give United more events at Loudoun United’s home, which seats 5,000 and opened this past summer. There are drawbacks: Segra’s playing surface is artificial turf, a stark contrast to the much-lauded grass pitch at the SoccerPlex. It is also about 10 miles further out into the exurbs than the SoccerPlex, and like the Spirit’s historic home, there is virtually no access to public transit options. It’s also a smaller stadium than the SoccerPlex, which can seat 200 more people.

Spirit defenders Tori Huster and Paige Nielsen acknowledged the change in playing surface, but in both cases felt like the switch was a positive. Huster, who has worked in the natural grass field industry, pointed out that work can be done to have grass training fields mimic the conditions they’ll have on Segra Field’s artificial turf. “I would imagine that they would be taking that into consideration and going to match the fields as much as possible because you are talking about injuries and all of that. With the turf field, I think if it is managed properly, it is a suitable playing surface.”

Nielsen added that “We can deal with four games on turf…it’s like Steve said: We realize this is a step we need to take to move in the right direction, with partnerships with D.C. United. You know, everyone’s scared of change, people are concerned about change, but that’s what we need to make the next step.”

However, Loudoun County’s population is surging, and the Spirit have had multiple indicators that a substantial chunk of their existing fanbase comes from west of the Potomac River. In each of the last three years, the club has sold out preseason games against college opponents at the 2,000-seat Evergreen Sportsplex, which like Segra Field is located in Leesburg. Washington’s own polling of attendees at their Audi Field games indicates that the bulk of their fans reside in Virginia, with Arlington County most prominently standing out.

Judging from both the Spirit’s games at Audi Field and other NWSL teams holding games at larger venues, expect Washington to try to schedule the league’s more star-studded teams the District. There’s a reason the Spirit chose to host Portland Thorns FC, the Orlando Pride, and Reign FC for their Audi Field games, after all.

This move marks an inflection point for both the Spirit, and for the NWSL’s independent clubs as a group. Washington is close to their ceiling as an organization at the SoccerPlex, but it’s not like there are 7-8,000 seat venues lying around to make incremental moves to. At some point, continued progress requires a substantial leap, and maintaining demonstrable growth is key in the pursuit of much-needed major sponsors. However, like any big leap, the risks require major consideration. The Spirit, for the first time in their history, may be ready for the challenge.