After a 16-year major league career, Jon Lester tells Jesse Rogers of ESPN he’s made the decision to retire. “It’s kind of run its course,” the 38-year-old said of his career. “It’s getting harder for me physically. The little things that come up throughout the year turned into bigger things that hinder your performance. I’d like to think I’m a halfway decent self-evaluator. I don’t want someone else telling me I can’t do this anymore. I want to be able to hand my jersey over and say, ’thank you, it’s been fun.’ That’s probably the biggest deciding factor.” 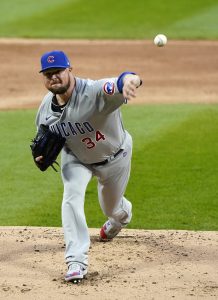 A second-round pick of the Red Sox out of a Washington high school in 2002, Lester entered pro ball as one of the more promising pitching prospects in the Boston system. Within a few years, the left-hander was ranked among the top farmhands in baseball and he made his big league debut at age 22 in June 2006. Lester was faced with incredible adversity just a few months into that run. He was diagnosed with anaplastic large cell lymphoma late in his rookie season, cutting that year short and requiring chemotherapy treatments.

Lester beat the disease and made an inspiring return to the mound in 2007. He made 12 regular season appearances that year, then pitched in three playoff games during the Red Sox’s run to a championship. Making his first career postseason start in Game 4 of the World Series against the Rockies, Lester tossed 5 2/3 innings of scoreless ball. He wound up getting the win in what proved to be the title-clinching game, as the Sox wrapped up a sweep.

Entering 2008, Lester was cemented as a key rotation member on Terry Francona’s staff. Incredibly durable, he’d make at least 31 starts over each of his next six seasons in Boston. While Lester only had two seasons (2009-10) with excellent strikeout numbers, he consistently demonstrated strong control and proved one of the game’s hardest pitchers to square up. A pillar of high-end consistency, Lester posted an ERA between 3.21 and 3.75 in five of six years from 2008-13.

Lester’s run in Boston was littered with accomplishments. He tossed a no-hitter in May 2008, earned back-to-back All-Star selections in 2010-11 and finished fourth in AL Cy Young award balloting during a 2010 season in which he tossed 208 innings of 3.25 ERA ball. Perhaps of most importance, Lester was excellent during the Red Sox’s surprising run to another championship in 2013. He pitched to a 1.55 ERA over 34 2/3 postseason innings that year, including 15 1/3 frames of one-run ball to earn two wins as part of a World Series triumph over the Cardinals.

Ticketed for free agency after the 2014 season, Lester began the year stellar as ever. He tossed 143 innings with a 2.52 ERA for the Red Sox, earning his third career All-Star nod in the process. Yet with free agency looming and the Red Sox on their way to a last place finish, they traded him to the A’s at the deadline. Lester continued to excel over his final few months in Oakland, eventually getting the nod in the AL Wild Card game. The A’s were knocked off by the Royals in one of the more thrilling back-and-forth contests in recent memory, and Lester hit the open market for the first time shortly thereafter.

Ranked by MLBTR as that offseason’s #2 free agent, Lester commanded a six-year, $155MM deal with a Cubs team looking to emerge from a massive rebuild. That’ll go down as one of the best free agent investments in franchise history, as he picked up right where he’d left off upon switching to the National League.

Lester worked 205 innings of 3.34 ERA ball his first season, helping Chicago to the NLCS. The following year, he compiled a 2.44 mark across 202 2/3 frames. He finished second in NL Cy Young voting, earned a fourth All-Star nod, and was arguably the top pitcher on a 103-win team. As he had so often in Boston, Lester shined in the playoffs yet again. He was tabbed that year’s NLCS MVP after tossing 13 innings of two-run ball to knock off the Dodgers. Lester made three outings with a 3.68 ERA during the World Series, in which the Cubs erased a 3-1 deficit against the Indians to end the franchise’s legendary 108-year title drought.

The third World Series title of Lester’s career proved to be his final one, as the Cubs never had quite the same level of success from that point forward. That wasn’t much fault of the veteran southpaw’s, though, as he remained effective for the next few seasons. He paced the NL with 18 wins in 2018, earning another All-Star nod in the process. As he entered his late-30s, Lester’s production finally began to tail off, although he remained remarkably durable and took the ball every fifth day through the expiration of his contract after 2020.

Last winter, Lester hooked on with the Nationals on a one-year, $5MM deal. He made 16 starts with Washington before being flipped to the Cardinals at the trade deadline. Despite lackluster strikeout and walk numbers, he managed a decent 4.36 ERA over 12 starts in St. Louis, proving to be a much-needed stabilizing force for a Cardinals rotation that had been hit hard by injuries. St. Louis made a miraculous September run to a playoff spot, but they fell to the Dodgers in the Wild Card game. Lester didn’t appear in what’ll go down as the final contest of his career.

One of the league’s most reliable hurlers for more than a decade, Lester leaves a fantastic legacy in the game. He tossed 2,740 innings over parts of 16 MLB seasons. He pitched to a 3.66 ERA, won exactly 200 games and struck out just under 2,500 batters. The five-time All-Star was a key contributor to three World Series teams with two separate franchises, and he’ll be remembered by both Red Sox’s and Cubs’ fans as one of the more impactful players in each organization’s recent histories. Lester’s career was valued at between 44 and 46 wins above replacement by FanGraphs and Baseball Reference, before accounting for an incredible 2.51 ERA over 154 playoff innings. According to B-Ref, he earned just over $188MM.

Lester will likely garner some Hall of Fame support five years from now. Whether or not he’s ultimately enshrined in Cooperstown, there’s no question he had a long run of excellence and reliability. MLBTR congratulates Lester on his fantastic career and wishes him all the best in his post-playing days.