Women’s basketball defeated Duquesne 58-52 Wednesday night at the Smith Center in a hard-fought defensive battle that kept the Dukes from taking advantage of the 3-point line. The Colonials’ (15-8, 7-3 A-10) defense stepped up at the 3-point line allowing only one 3-pointer out of 29 attempts by the Dukes (14-9, 4-6 A-10), keeping their shooting percentage at just .034 from … END_OF_DOCUMENT_TOKEN_TO_BE_REPLACED

A dueling pair of lawsuit filings have revitalized the battle over a 2017 pay discrimination suit against GW as the University looks to quash allegations that it deprived an athletics department employee of fair pay on the basis of sex. In a 44-page motion filed Friday, the U.S. Equal Employment Opportunity Commission said the University failed to argue a “legitimate” and … END_OF_DOCUMENT_TOKEN_TO_BE_REPLACED

Gymnastics fell to North Carolina by a .975 margin Saturday in their first dual-conference meet of 2023 at Chapel Hill. Despite racking up a season-best 195.35 points, the Colonials (3-2, 0-1 EAGL) could not match the balance and precision of the Tarheels (2-2, 1-0 EAGL), who tallied 196.325 points and bested GW in three of four events. GW sits in fourth place in the eight-team … END_OF_DOCUMENT_TOKEN_TO_BE_REPLACED 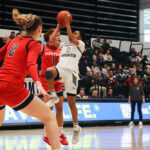 Women’s basketball took down Dayton 71-57 in a resounding win Saturday in the Smith Center. Freshman guard Nya Robertson led the way for the Colonials (14-8, 6-3 A-10) and continued to make her case for A-10 Rookie of the Year with an electric 26 points off the bench to go along with three rebounds and three steals. Not to be outdone, senior forward Mayowa Taiwo pulled down … END_OF_DOCUMENT_TOKEN_TO_BE_REPLACED 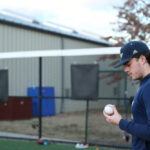 Even in the cold of January, GW’s baseball team suits up for offseason practice at their facility in Arlington, Virginia. In the first installment of our newest photo series profiling GW’s student-athletes, The Hatchet got a behind-the-scenes look at the sights of the squad in action on the field and cracking jokes from the dugout. Sage Russell | PhotographerSophomore southpaw … END_OF_DOCUMENT_TOKEN_TO_BE_REPLACED