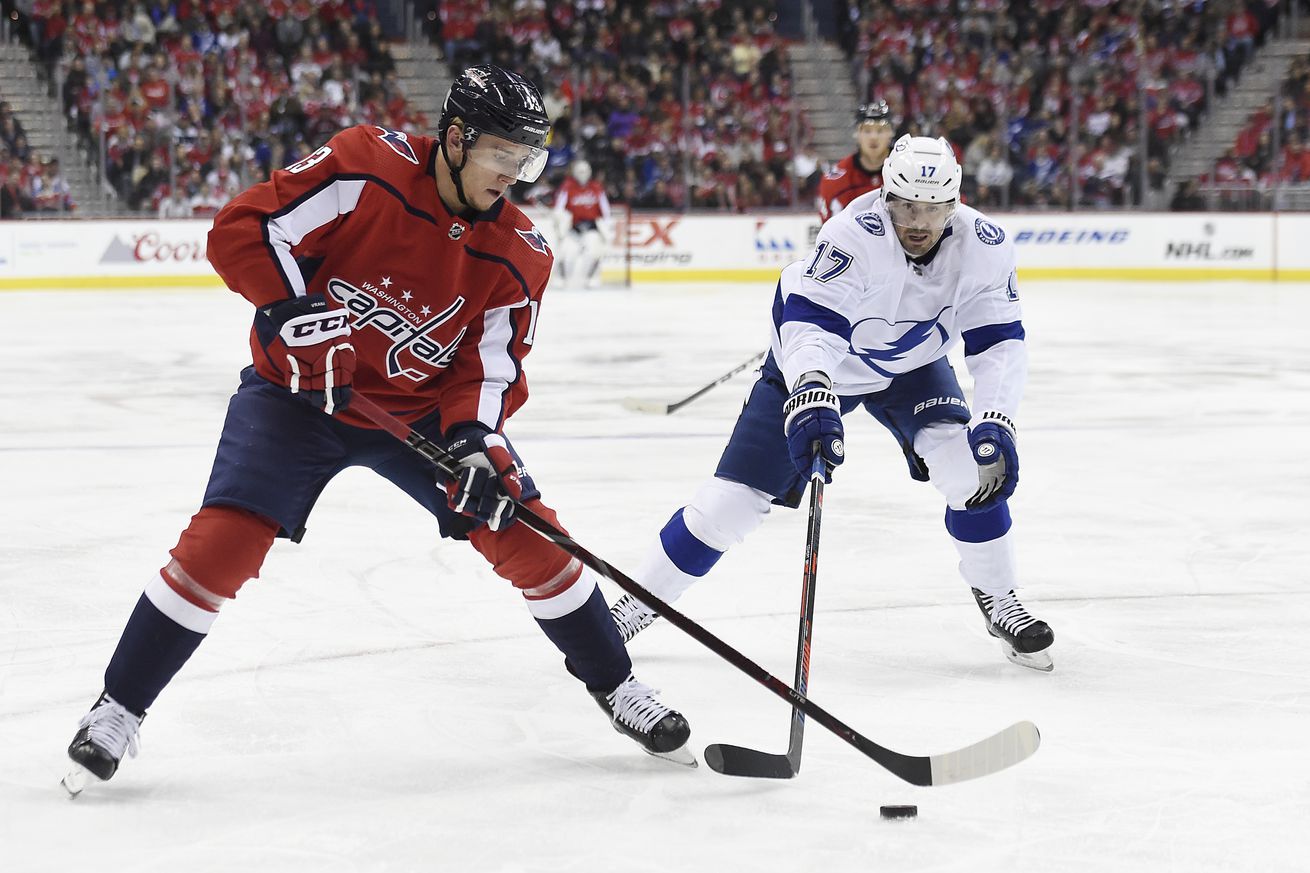 It’s Thanksgiving Week in Washington, and that means hockey, with two home games wrapped around the holiday followed by a trip to the Motor City.

It is Thanksgiving Week, and for Washington Capitals fans, that means what has become the annual “wraparound” home games on Wednesday and Friday — this year featuring the two Florida franchises. The week’s “All-Atlantic Division” festivities wrap up with a quick visit to Detroit to play the Red Wings.

Florida Panthers (Wednesday/7:00pm)
The Florida Panthers visit Washington for the only time this season on Wednesday in the second of three games the teams will play this season. The Caps won the first game of the series in Florida on November 7th, coming back from a 4-3 deficit entering the third period on a Tom Wilson goal, and then winning it just 17 seconds into overtime on another Wilson goal.

Florida goes into the new week making some progress of late, going 5-3-0 in their last eight games. The Panthers are in the midst of a borderline bizarre schedule that sees them play 14 games at home in a 16-game stretch. After they visit the Caps they will return home for a nine-game home stand. Florida lost the first of the two road games in this portion of their schedule, dropping a 4-2 decision in Carolina to the Hurricanes last Saturday.

The Panthers have improved significantly under first-year coach Joel Quenneville, who took over for Bob Boughner. The Panthers played 24 games to a 12-7-5 record under Quenneville. Compare that to the 24-game record last season of 10-10-4. Their goal scoring is up, 85 to 77, year over year. Their goals allowed at this point (86) are almost unchanged from the same point last season (85), but they do have a more effective penalty kill, erasing shorthanded situations at an 83.0 percent rate through 24 games this season while doing it at a 76.3 percent rate at the same point last season. The power play is an odd creature for the Panthers in this regard. Last season the Panthers had 93 power play chances through 24 games and converted 26.9 percent of them. This year, the item of note is not so much the efficiency, this year’s version being slightly off last year’s pace at 24.3 percent, as much as the chances. Florida has enjoyed only 74 power play opportunities through 24 games this season.

Tampa Bay Lightning (Friday/5:00pm)
The Tampa Bay Lightning make their first of two visits to Capital One Arena on Friday, the first meeting of the teams in their three-game series this season. If this rivalry lacks the intensity of those the Caps have with old “Patrick Division” rivals like the Pittsburgh Penguins, the Philadelphia Flyers, or the New York Rangers, it is one of the more interesting ones the Caps have. Former Southeast Division rivals, the Caps and Lightning have a memorable postseason history, having met three times. The first time, in 2003, the Lightning defeated the Caps in six games, clinching the series in a three-overtime game in Washington. The second time, in 2011, the Lightning swept the Caps while going into the series as a lower seed. The last time, in 2018, the Caps won the first two and last two games of a seven game series, shutting out the Lightning in Games 6 and 7 on their way to winning the Stanley Cup.

The Lightning seem to have shaken off some early season doldrums to get back to being the team fans were familiar with last season. After a 6-5-2 start that might have had people wondering if the team was in a funk after last year’s disappointing first-round playoff exit after posting a record-tying 62 regular season wins, the Lightning are 5-2-0 in their last seven games going into the new week.

The Lightning did not lack for offense in their sluggish start, averaging 3.31 goals per game in going 6-5-2. But since then they have been burning out bulbs on the scoreboard, averaging 4.43 goals per game in their last seven contests, posting five or more goals three times, including a 9-3 pasting of the New York Rangers on November 14th.

What stands out in the Lightning’s 5-2-0 record over their last seven games is that they have at least one power play goal in all five of the wins (12-for-21/57.1 percent), while they were blanked on the man advantage in the two losses (0-for-4). Their penalty kill is also perfect in the five wins (14-for-14), but it has been generally good of late, going 24-for-25 in November (96.0 percent). Tampa Bay goes into the new week with both the best power play (42.9 percent) and penalty kill (96.0 percent) in November.

What the Lightning have not yet done to shake off their slow start completely, though, is win on the road. Tampa Bay is just 6-5-1 on the road this season and has yet to win consecutive road games in regulation (they had consecutive road wins in October, the latter of them in a shootout). After defeating the Chicago Blackhawks in their last road contest, extending their string of alternating road wins and losses to seven games (4-3-0), they get a chance to get that second consecutive road win in regulation on Friday when they visit Washington.

Detroit Red Wings (Saturday/7:00pm)
The Caps make their first of two visits to Detroit on Saturday to face the Red Wings. For the Wings, these are the dark days. They missed the postseason for a third straight time last year, their longest string of playoff absences in more than 35 years (they missed five straight postseasons, 1979 through 1983). With the worst record in the league (7-15-3) going into the new week, they appear destined for a fourth straight year on the outside looking in on the playoffs.

Home has been no sanctuary for this team, either. Detroit goes into the new week with a 4-7-1 record on home ice, the worst in the league and as the only team left not having earned ten standings points on home ice. There is not much to wonder about as to why. The Red Wings have only 27 goals scored in 12 home games, the 2.25 goals per game being the second weakest scoring offense on home ice in the league (Winnipeg: 2.17). They have fewer even strength goals (18) on home ice than any team in the league and only twice recorded more than two in a home game.

The Red Wings have had a problem generally when it comes to defense at home. In 12 home games to date, they allowed five or more goals four times. Only New Jersey and Nashville have allowed at least five goals more times (five apiece), although perhaps oddly enough, only once did the Wings do so to an Eastern Conference team, and that was in early October (a 5-2 loss to the Toronto Maple Leafs).