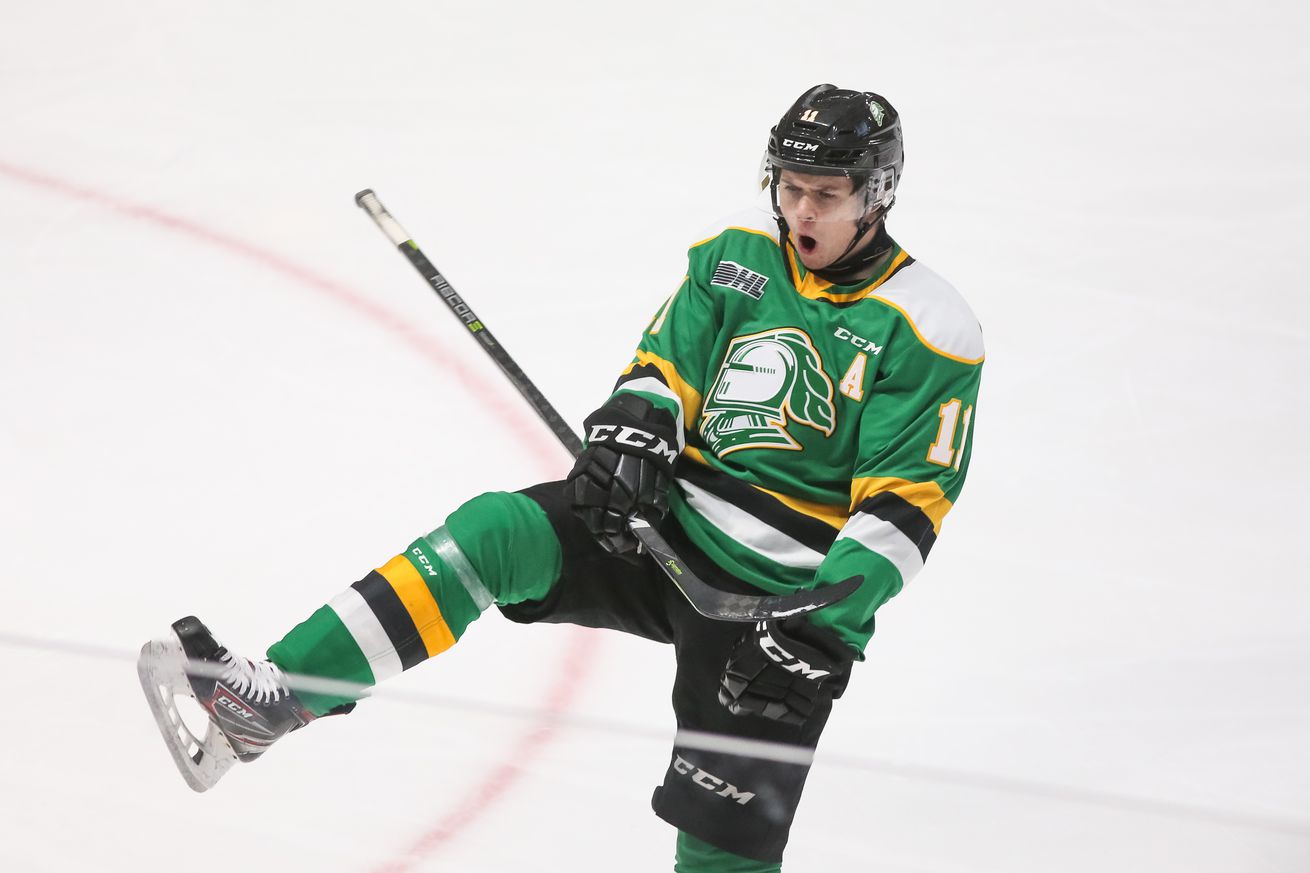 After the Bears finally turned it on in December, they continued that great play through January going 10-4. They even kept on winning after losing two of their top offensive players in Joe Snively and Mike Sgarbossa in the same game at the beginning of January.

They are now tied for second in the league in points. They have improved their offense, going from 26th in November to 12th in January, even with their power play being absolutely terrible (although that’s somewhat balanced by their second-best penalty kill).

If they can improve their power play and get healthy they should stay at the top of the league.

Alexeyev has continued to be good, but not otherworldly, in January — but that’s fine, as no one expected him to come in and light the AHL on fire right away. He’s fifth in scoring for U21 defenders and 11th overall among rookie defensemen. He barely gets in any power play time, which probably keeps him from putting up more points, as he was known as a great power play QB in juniors.

Fjallby is doing what he does best: bringing energy and speed through out the lineup while being great on the penalty kill. There isn’t much more Fjallby can do at the AHL level as he’s destined to be an impactful depth NHL player. He just needs to get used to the pro game speed then he’ll be ready.

Pinho had all of 12 points last season in 73 games, he scored 12 points in the month of January. He’s been the most improved player for the Bears by far. He has been both wing and center, which should help improve his overall game.

Malenstyn is producing he like he should for a fourth liner. He has that path much like Fjallby, where they are what they are: great depth players at the NHL level. Just need a bit more cooking.

O’Brien is on pace for a career season in the AHL as he’s getting consistent top six time and making the most of it. Over the past few seasons he’s been scoring more goals than assists, but he’s spreading out the wealth this season.

Like Alexeyev, Fehervary is playing well, but not blowing the doors off anything. Which, again, is fine as a rookie defensemen in the AHL. Both of those guys still have a bright futures. They’re on schedule to enter the NHL over the next two seasons.

Pilon is continuing to have a strong season for the Bears. Like Pinho he’s playing both center and wing. He’s also getting the most power play time among the Bears’ youngins. With Sgarbossa injured he’s been playing more center in the top six, which will be great for his development.

Sniveley was on a roll for the Bears, being one of their best players, scoring eight goals and six assists in the last 18 games until he was injured early January. He hasn’t been back since. He was withheld to just three games in December, luckily he has been on the ice lately and should be back soon.

Gersich has been heating up after a very slow start, even netting his first hattrick in the last game of January. Somehow he’s been doing it with Kale Kessy as his center. If you don’t know who Kessy is, he has played 20 games, has ZERO points and just 7 shots. Why he’s playing over some other players is a head scratcher. He’s been centering the third line to boot. Anyways, I digress. It’s good to see Gersich finally find his game, hopefully he continues.

Johansen finally returned from a two month injury, played two games, and got injured once again and hasn’t played since January 5th. It’s sad. Johansen had some real promise to be a top four defenseman but big time injuries over the last two seasons has really stunted his development. Hopefully he can get back, stay healthy, and turn into the player he’s capable of.

Just like Johansen, Hobbs came out of juniors with a lot of promise but injuries have really hindered his development. It was announced that he suffered a shoulder January 4th and will have season ending surgery to fix it.

If you know me, you know I hate how the Bears are “developing” Leason. He’s been getting bottom six time with little talent to work with, no power play time, and has actually been healthy scratched multiple times for Colby Williams, yes, the defensemen. They had Williams play on the fourth line over Leason. And when Leason is in, he’s had Kessy as his center most the time. Yeah, the guy with zero points in 20 games. The guy with 29 points in 195 AHL games. Why he’s in the AHL, in a third line role, is beyond me. Again, they aren’t setting up for Leason to succeed.

Williams is Williams. He steady leader. As stated above he’s been getting forward time as well.

Vanecek didn’t have as good January as his December but he was still good, earning MVP of the All Star game with his performance. Him and Copley have been going back and forth for starts, it’s a good battle forcing both players to step up. Hopefully he gets a game or two with the Capitals this season.

Sutter has been playing as fourth line center after coming off an injury to start the season. He’s doing well with with what he’s given. The good news is he’s been staying the lineup even without much production, which is expected.

Clark had a great January. Hopefully this increase in production is him heating up. It’s no secret that Kody is held up to high standards due to his draft pick status. He’s a good power forward with a great shot. Hopefully he continues to find his game.

Riat returned from injury with an effective January, which is great news, because players coming back from injury usually take awhile to shake off the rust. Not for Riat. He’s playing on the second line and making most of his time.

As usual, Walfridsson is a pure defensive defensemen so don’t expect big points from him but he’s at least doing something.

It’s hard to tell anything about the Division 1 league or how many minutes or what line Kristian is playing on. He probably should have stayed in North America.

Geisser was loaned from the AHL to the NLA, which is probably better for his development since he gets more time in Switzerland.

As per usual, McMichael has been tearing apart the OHL. Through his 36 games he has gone scoreless just twice. He’s currently third in overall points and third in goal scoring even though he missed 10 games due to World Juniors. He’s on pace for 130 points, which hasn’t been done in the OHL since Patrick Kane (145 points) and John Tavares (134 points) did it in back in the 2006-2007 season. Sergei Kostitysn (131 points) also did it in the 2006-2007 season, but he also rode coattails of Kane that season. That’s a hell of a batch of players to be associated with.

The following stats from Pick224 only go through the first 34 games, so not McMichael’s last two games of the month, which is a shame because one those had a hattrick. But in those first 34 games McMichael ranks second in even strength primary points, second in primary points per game, and third in even strength primary primary points per 60 minutes. All the guys in front of him are D+2 player or either Quinton Byfield or Marco Rossi, two players going top five in this years draft. The Capitals found something special.

Protas had a bad January, at least by his standards. A lot of players would love to have nine points in 13 games, but for Protas that’s not good. He used to sit at the top of the league in points and was once head and shoulders above everyone else in primary points, but he really took a hit in January.

Florchuk was traded to the Vancouver Giants early in January, to join Alex Kannok-Leipert, and has been fantastic there. In the nine games with the GIants he put up five goals and eight assists. Maybe a change of scenery will really boost his numbers. He was always fine but it’s good to see him dominate in his D+2 years.

Alex is continuing to have a good offensive year, at least for a defensive defenseman. He’ll never put up the big points, but it’s good to see him adding to his game as he gets older.

Hugo transferred from the Europe league Mestis and joined the junior leagues, which is probably better for his development. Lately he’s been getting time on the top pair, which he wasn’t getting in Europe. He’s still learning the ropes in North America but has been impressive so far.

Maass had a good December. He hasn’t been impressive since his Freshman year so hopefully this a good springboard for him to finish his Sophomore year on a positive note.

Gibson’s number took a little bit of a hit in January. Specifically, it was his last three games that really dragged down his numbers, posting a .885sv% over that span. But he still sits second in Freshman save percentage, only behind Spencer Knight. So he’s still looking good.