Quarterbacks have remained central to the storylines leading up to this year’s draft, but the class is dominated by its defensive talent. Two of the top prospects with regard to defensive linemen are Georgia’s Jordan Davis and Houston’s Logan Hall. 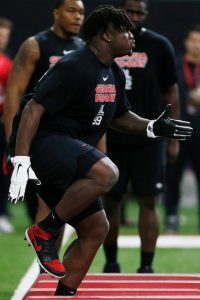 As noted by NFL Network’s Tom Pelissero (on Twitter), Davis has had pre-draft visits with a number of teams. Included among those are the Ravens and Eagles, two clubs which could very well find themselves within range of drafting him. Baltimore is set to pick 14th, while Philadelphia owns selections No. 15 and 19.

The Ravens reunited with Michael Pierce this offseason, signing him to occupy the nose tackle position. His addition points to the departure of Brandon Williams, leaving room for at least depth in that role. The Eagles, meanwhile, released, then re-signed Fletcher Cox, an anchor on the team’s defensive line throughout his career. He only inked a one-year deal, though, so the position should be a point of emphasis in the draft.

Davis was a mainstay on the Bulldogs’ defense during his four seasons with Georgia. Playing in a run-stopping role, the six-foot-six, 340 pounder totalled seven sacks and 11.5 tackles for loss. Those numbers, along with eye-popping athletic testing at the combine, leave the door open to his development as a three-down player.

While Davis – who finished top-10 in Heisman voting last season – is viewed as a first-round lock, Hall may join him on Day 1. Aaron Wilson of Pro Football Network recently reported that the list of teams to have met with him includes the Giants, Cowboys, Texans, Buccaneers, Bears and Titans (Twitter link). His draft ranking places him in a range from late in the first round to early in the second, so the interest from those teams comes as no surprise.

In four years with the Cougars, Hall put up almost identical numbers to Davis. His potential versatility in terms of where he can line up on the field (at 260 pounds, many view him as a defensive end at the NFL level), and overall pre-draft process have helped his stock. He could find himself at the top of the second tier of d-linemen, behind Davis and Devonte Wyatt.

These two have certainly generated plenty of interest, making their ultimate destination next week one of the many things to keep an eye on at the draft.