Miles Boykin is back. The Ravens announced today that they’ve officially activated the wideout from injured reserve. The 24-year-old was designated to return in late September. 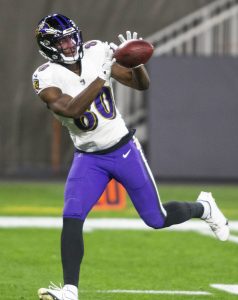 The 2019 third-round pick had appeared in all 32 regular season games (with 24 starts) for the Ravens between 2019 and 2020. The wideout hauled in 32 receptions for 464 yards and seven touchdowns through those two seasons, and he added another six receptions in three playoff games. Boykin was sidelined by a hamstring injury during training camp, leading to his IR stint.

The Ravens will presumably get additional reinforcement when first-round pick Rashod Bateman returns. The wideout was designated for return at the same time as Boykin, but his return will apparently be delayed.